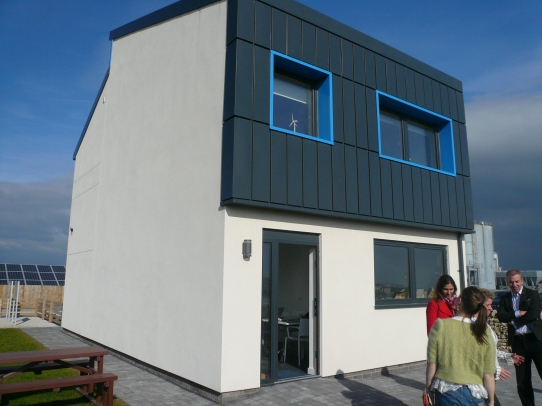 Designed by Professor Phil Jones and his team based at the Welsh School of Architecture, Cardiff University, the house was built in July 2015 as a ‘smart energy’ prototype in an astonishingly successful attempt to meet the tough targets for zero carbon housing set by the UK Government (now axed by George Osborne). The house, constructed as part of the Wales Low Carbon Research Institute’s (LCRI) SOLCER project, and supported by SPECIFIC at Swansea University, is low-cost, energy smart, and is capable of producing and exporting more energy to the national electricity grid than it uses.

Some of the features, allowing the house to be really smart with its energy production, storage and usage.

Professor Jones said of the design,

“The Welsh and UK Governments – and governments across the EU – have set targets for very low ‘nearly zero’ energy buildings by 2020, and zero carbon new housing can deliver this and more. This means that as an academic community we have to rise to that challenge and come-up with innovative new ways to build houses of the future.”

When the UK government’s eventual dismissal of these targets was announced, it attracted widespread criticism not only from environmentalists, but also from house builders, planners and universities. It would have ensured that all houses were carbon positive and making significant energy contributions to the grid by 2016. 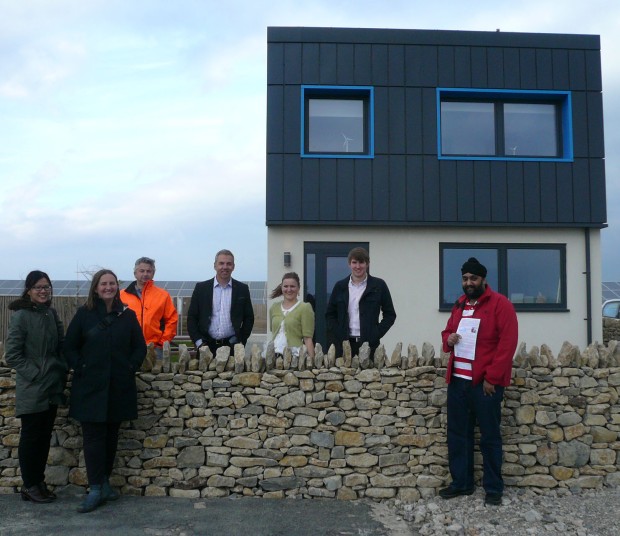 GFA at the SOLCER House

On Friday 16th November 2015, a few members of staff from GFA decided to make a trip to see it. I asked around the office to see what we learned: 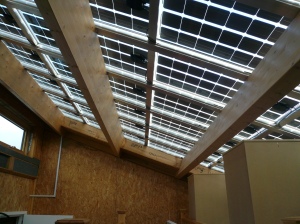 The loft space, which can currently not be lived in due to its lack of insulation.

“The most interesting part of the building from a design standpoint was the loft area, which is roofed in glass with PV panels attached, creating a striking, light-filled space. Unfortunately, without insulation, the space is not actually habitable. But the basic idea could be taken forward with some form of transparent insulation to create a very interesting architecture, which directly makes the eco-credentials of the building visible.” 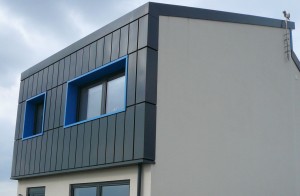 Transpired Solar Collector (TSC) Panels.
They’re essentially sheets of metal that have a few tiny holes in and an air gap behind. When the sun hits the surface of the metal, the air behind it heats up. The system then moves this heated air around the house.

“The external metal wall panels, TSC solar air collectors, were an interesting concept. It’s good to see more sustainable projects being built in Wales and congratulations to the WSA Architectural Science group on funding, designing and building an energy positive house. GFA have our low carbon batteries re-charged after the visit. The attic space was interesting in that the PV cells were mounted directly onto glazing; seems a shame that it wasn’t a habitable room but is a great concept for further development.” 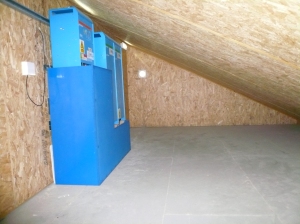 The house, although being an incredible positive carbon model, is perhaps not the most aesthetically attractive home; will that make it unattractive to developers and housebuilders, despite all its benefits?

“It was quite inspiring to see a physical manifestation of what can actually be done with off the shelf materials to make a house environmentally friendly. It’s a shame that it hasn’t turned out to be the most attractive building. I think the next step for architects though is to use some of the techniques and systems cleverly to create an attractive (and potentially cheaper) architecture that developers will be more willing to get on board with.”

For a non-architect who doesn’t really know anything about the environmental aspects of designing a building, it’s really refreshing and encouraging to see that environmental concern and energy efficiency is at the forefront of research and practice in universities and in architectural studios. It’s continuing to be pioneered, despite there no longer being an immediate target, which is just as well really, as we need to be reaching an 80% reduction in carbon emissions from homes by 2050 under the Climate Change Act.

What Sam said was particularly interesting, because in 2007, Gaunt Francis entered and won the 2007 Home for the Future competition with their design for the Green House. It won with over 22,000 votes not just because it was zero carbon rated, but precisely because of its elegant and homely design which was missing from so many other attempts at creating eco-housing. The 2015 SOLCER House was successful as a technological experiment to see if a carbon positive dwelling was a possibility, but the Green House was the first zero carbon, Code Level 6 dwelling to be built by a volume house builder, Barratt, at the Building Research Establishment (BRE). Really, the Gaunt Francis design was the first realistic eco-house ever built in the UK, because of its attractiveness to ordinary people who want somewhere cosy to come home to at the end of the day (which makes it an attractive design for developers, too).

We’ll take a closer look at GFA’s Green House design and building, in next month’s blog posts. Perhaps the technology of the SOLCER House and the Green House design together, are an insight into the sustainable buildings of the very near future.