We were delighted to join our colleagues at Audley Group for their update on the new Mayfield brand at The Building Centre on Store Street in London on Thursday.

Our Director, Toby Adam and Associate, Chris Jefford, who lead the GFA Mayfield team, were at the presentation hosted by Nick Sanderson, CEO of Audley Group.

Model of London at the Building Centre.

Nick began by reminding everyone of the history of Audley Group, and the villages that have been created under the Audley brand, many of which have been designed by GFA. Audley is a high-end product, with an enviable reputation for the quality of the interiors and communal spaces, as well as the quality of service. Audley Group intend to bring these qualities to a wider audience a more affordable level via the Mayfield concept. They will do this by providing slightly smaller apartments, and by doubling the number of units on a site from the typical Audley village of around 125, to 250. This will allow Mayfield to charge a lower monthly management fee, opening up this new vision of retirement living to whole new market.

ARCO (Associated Retirement Community Operators) Executive Director, Michael Voges was on hand to offer an overview of the retirement living industry in the UK, compared to other more mature markets such as South Africa and Australia. He gave a detailed insight into the demographics and the scale of the challenge in providing housing and care for the older generation, but also noted that this generation are mostly homeowners with a sizeable asset which could offer the solution for providing an independent lifestyle with care on demand in your own home. 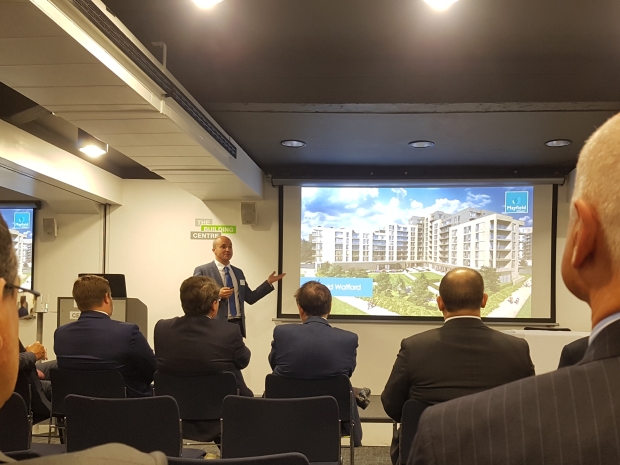 Audley Group Land Director, John Nettleton, then highlighted the new GFA designed Mayfield scheme at Watford, the first Mayfield project to have been granted planning permission to date. John described the investment opportunities, the funding vehicles and the planning advantages of having a C2 use on a masterplan, reminding those present that Audley and Mayfield make compelling and persuasive partners in land development. John noted that Retirement Living with care is a beneficial planning use and helps local authorities meet their plan obligations for providing specialist housing as well as freeing up family housing that is under-occupied.

The London Festival of Architecture (LFA) is Europe’s largest annual Architecture festival. It celebrates the importance of Architecture and Design in London and features an array of public events including exhibitions, talks and debates, tours, film screenings, and family activities – the vast majority of which are free. This year’s festival takes place across the city from 1st -30th June 2018 which aims to explore the theme of ‘identity’.

The LFA was founded in 2004 by former director Peter Murray. During the first 4 years, the festival was held only once every two years, but after growing popularity, it has since taken place on an annual basis. The festival attracts hundreds of thousands of people every year with a global media audience of several million.

One of the events, ‘Concrete Capital’, took place on 6th June 2018 and was organised by Architecture and Design practice SODA Studio.  Concrete has often been described as ‘brutal’ or ‘inhumane’, but is now celebrated for its beauty and its role in the bold designs that have shaped London’s architecture. The focus of the event was a guided tour of the recently refurbished Silver Building into Artists’ Studios. The evening also included refreshments, film screenings, and talks which explored the Capital’s identity, which SODA describes as a “much-maligned building material”. Our very own Kimberley Harris partook in the evening’s event and presented some of her Architectural Photography work.

Kim was previously tutored by architect and academic Professor Peter Salter at the Welsh School of Architecture, as part of her Masters. Salter worked for renowned British Architects, Alison and Peter Smithson in the early 1980’s. Kim’s passion for Post-War Architecture developed after working alongside Salter and researching his career. In her previous employment, Kim worked on a number of social housing refurbishment works for Cardiff Council, and started researching Estate Redevelopment projects elsewhere; during this process, she became a campaigner for the recognition of the 1960’s housing as important work.

As a keen amateur photographer, Kim often posted many images of Brutalist Architecture on her social media pages. After her blog audience started to rapidly increase, she soon realised it was time to explore professional Photography and decided to undertake Photography courses at Ffotogallery accredited by Cardiff Metropolitan University. 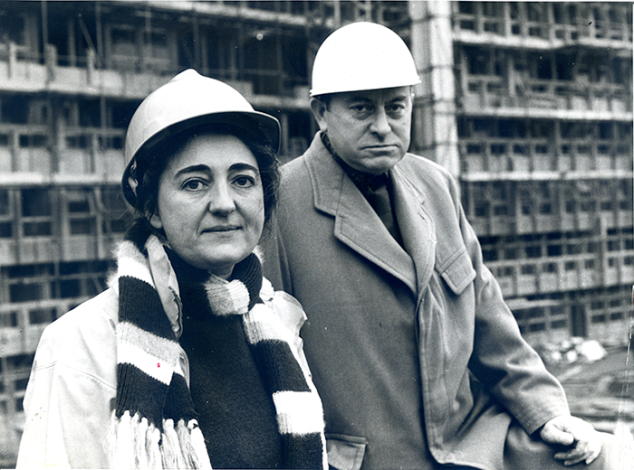 Author Christopher Beanland, who chaired the evening’s talks, was aware of Kim’s work via her social media accounts; she was soon approached by event organiser Rob Feihn to be a participant. During her talk, Kim briefly touched on the period of Architecture between 1950 and 1970, also known as the ‘Golden Age’. She went on to discuss Robin Hood Gardens – a residential estate in Poplar, London, designed in the late 1960’s by Architects Alison and Peter Smithson. The Smithson’s were chosen to produce plans for this new housing because of their international reputation following the publication of a series of essays on Urbanism. Robin Hood Gardens presented a real opportunity to put their theatrical work into practice.

Kim spoke of the site’s layout and how by the building’s completion in 1972, it had become internationally recognised with the Smithson’s now the leading protagonists of ‘New Brutalism’ – the most important British Contribution to the world of Architecture in the 20th Century. Robin Hood Gardens provided 214 homes in the form of Maisonettes and Ground Floor flats; the interiors strategically arranged to overcome acoustic problems generated by a constrained site, bound on three sides by major roads. Bedrooms face into a central green space or ‘stress free zone’ to avoid night-time disturbance, kitchens centrally located to face both onto the green space and raised access walkways or ‘streets in the sky’. 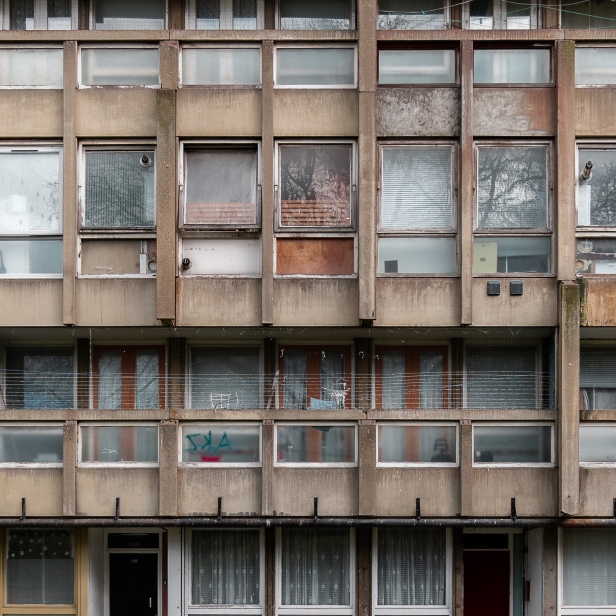 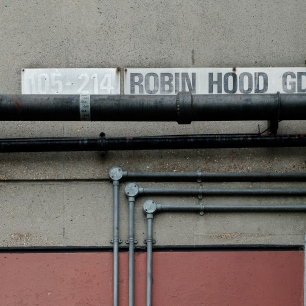 Kim’s presentation also included a brief overview of redevelopment plans for the site. The Western Block was demolished in January this year. The Eastern Block remains inhabited to this day, however, is due to be demolished during the later phases of the Black Wall Reach regeneration proposals. The first phase of demolition, back in December 2017 signalled, for Kim amongst others, the last opportunity to photograph the building.

Kim concluded her talk by explaining why concrete buildings are so distinctive in London today. She expressed: “In 1963 the ‘London Government Act’ sought to create a new body to cover the rapidly developing city replacing the London County Council.  ‘The Greater London Council’ was divided up into thirty-two administrative boroughs. In 1964 boroughs were granted responsibility for housing and jurisdiction over planning – a shift from county wide concerns to local issues. In my opinion, what really drove momentum in Post-War Architecture was the competition between Borough Architects departments.”

“When I look at Brutalist Architecture, I’m often overcome by beauty, but it’s more than a simple appreciation of concrete’s materialism; it’s the reminder that the ethical ambitions of Architects working in the post-war period, to provide a decent quality of housing for everyone, were equally as important and very often outlive trends in aesthetic.”, says Kim.

To view more of Kim’s photography, check out her blog here: http://betonbrut.london